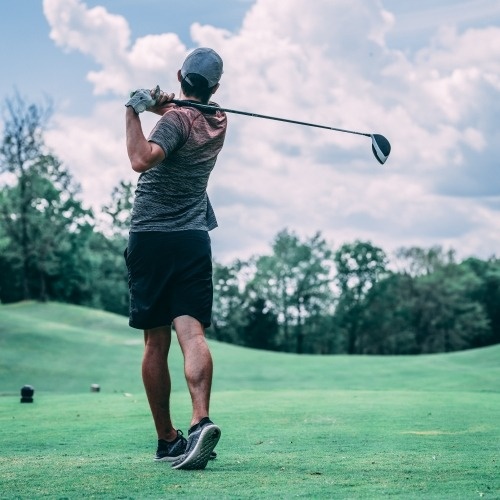 This past week has been devastating for many of my fellow Texans. Across the state, people lost power, pipes burst, and many have gone days with no access to running water. As we thaw out, I am reminded of how I long for the days of 75-degree weather so I can get back to doing what I enjoy most, a nice round of golf (although financial planning is my true joy…).

After passing Level III of the CFA exam in 2017, I decided to get back into playing golf. Growing up, I had always enjoyed the game. Something about going out and competing against yourself made me subtly happy inside. After getting my passing results back from the CFA Institute, I got myself a “starter” set of clubs (during my absence from golf I forgot how expensive the game was). I started to play consistently over the next several years. After watching my terrible slice turn into a beautiful fade and my handicap drop by nearly 10 strokes, I decided the only way to break 80 was to invest in some new clubs.

About 9 months ago I was having some issues when swinging my driver. It felt out of control. I was playing golf with a friend of mine and I kept complaining about how out of control my driver felt. On the next tee box, he let me try his club. He changed out his shaft from a “regular flex” to a “stiff flex”. His club helped stabilize the driver in my swing, which is exactly what I was looking to do. I then went to the store and switched to the stiffest club shaft known to man. This provided a fix to the “out of control” problem, but after a few rounds, I realized that I was not getting the sort of height I used to on my shots. Something was wrong here. After all, it couldn’t be me. It had to be my clubs.

I decided this past holiday season was the perfect time to finally make the investment in a new driver. As with everything nowadays, I started researching online about the newest drivers and their claims of adding distance and consistency to your shot. My goal was to be the most informed buyer of a driver in the past century by the time I was ready to go to the local sporting goods store. I wasn’t going to have a salesperson pull one over on me and upsell me on the latest technology. I was going to be informed and more knowledgeable than them. Take that club salesman.

I started my Google journey shortly after Thanksgiving. I kept reading about every new driver and who uses which one on the PGA Tour. I then picked my driver. I knew which one I wanted. It had the latest A.I. (artificial intelligence) infused in the face of the driver and some well-known PGA tour players were already using it. Right before getting in the car to make my “investment”, I clicked on a YouTube video review of the new club. The reviewer said something to the effect of “the new XYZ driver claims to have the latest AI technology, but did that come at the price of reduced MoI?” MoI? What? Throughout the whole 19-minute video, I kept thinking to myself, what is MoI? I got nothing out of the review but some curiosity as to what exactly MoI was. I put my keys down and went back to Google. I think I should check out this MoI business before I head to the golf store.

Then began the infamous Google rabbit hole of the actual physics behind a golf club. After weeks and weeks of reading, I learned how the center of gravity (CoG) can impact the moment of inertia (MoI) which in turn will affect the spin rate and loft of the shot. Not to mention this all depends on your swing speed, angle of attack, and degree of out/in of your swing plane. I then realized how little I knew about golf clubs and my personal golf swing. Some golf clubs were designed to be more forgiving, while others were designed to give up some forgiveness in exchange for more distance. Depending on your swing speed, angle of attack, and swing path you may be better off with certain drivers with certain settings.

Okay, enough. My head was spinning. Even though I understood the tradeoffs between MoI, spin, and distance, I didn’t have the slightest clue as to what my swing speed was or my angle of attack on the ball. I decided to bite the bullet and go ahead and get fitted for a new driver by a professional. In the end, I wanted something that was going to fit my game so I could get back to flirting with breaking 80. My wife has assured me that is the only flirting allowed.

Knowledge in hand, I began hitting some balls with my old driver. The fitting pro then asked me if I had trouble getting the ball higher into the air. Exactly! That was one of my biggest issues. He also commented that this was causing me to lose a bunch of distance. We then looked at the ‘analytics’ behind my swing. Turns out I had a swing speed approaching 110 mph, but my average angle of attack was about 3 degrees down. He then went to the back and came out with a club for me to try. First shot, bam! Height was perfect, right down the middle, and about 30 yards further than I had previously been hitting it. After trying different clubs, club settings, shafts, etc. I landed on the driver that fit my swing the best. Turns out it was far from the driver I had initially thought was the best after my google searches. After my fitting was done, I asked, “How misfit was my old driver”? The pro said, “Wrong club head, weights were in the right place, the shaft you switched to was the worst move you could have made, and it was the wrong loft on the driver.” He then said, “Other than that you did great”.

What I went through is a psychological phenomenon known as the Dunning-Kreuger Effect. When we know very little about a subject matter, we get more confident in our abilities to make the right decision (or what we think is the right decision). As Charles Darwin once said, “Ignorance more frequently begets confidence than it does knowledge”. The more I learned about the physics behind a golf club and golf swing, the more I realized I needed help to get the perfect club to fit my swing and its many flaws.

In investing, we call this “overconfidence bias” which is loosely related to its cousin “illusion of knowledge” bias. These biases are reflected when an investor overestimates their own intuitive ability and reasoning. The overconfident investor will often jump into an investment and overestimate the return potential while underestimating the risk associated with a said investment. Investors exhibiting these biases will also tend to chase market trends which leads them to a portfolio lacking diversification, often with excessive turnover, and can even lead to higher transaction costs. These mistakes typically result in lower returns (and higher taxes) for the overconfident investor.

A recent example of this has shown up with the “new wave” of investors entering the market and the ensuing GameStop saga. The mentality of “anyone can do it” is rampant in today’s marketplace. While the internet has provided us with the ability to search any topic at any given moment, it doesn’t necessarily mean this information should be used to jump to conclusions and make decisions. After all, it’s just a golf club, right? You swing it and hit the ball, how hard could that be?

We all have our areas of expertise. Have you ever heard anyone ask their orthopedic surgeon to “just give me a local – I’ll take it from here Doc?” Despite overwhelming statistical evidence showing people working with a financial advisor are better off than those without one, many people are reluctant to seek out an advisor. Without asking for help from a professional club fitter, I would have ended up wasting hundreds of dollars on a club that would have done me no good because it wasn’t the right club for my specific situation. The same applies to personal finances. When I meet someone at the golf course that tells me their financial plan or investment strategy, I often see someone who has a ‘misfit club’. They are likely to waste many years of their life struggling with poor investment returns, excess taxes, and even a high likelihood they won’t be truly prepared for retirement. This isn’t to say I am some sort of financial genius, but it is to point out that we all have our own expertise. We all need each other to get the best outcomes we can for the various aspects of our individual lives. Much like I needed a professional golf club fitter, most out there will need varying degrees of help with their personal finances. Don’t allow the Dunning-Kruger effect to cause you financial problems.

If you would like more information on how we can help you, or if you would like the name of my golf club fitter, please don’t hesitate to reach out to us here. And stay tuned as we discuss more overlap between psychology and personal finance.